Fatal fires don’t come more harrowing than the crackling inferno that took Collinwood’s children in 20 awful minutes, and prompted the grief-stricken community literally to vote itself out of existence. It is the worst school tragedy in Ohio’s history.

A crisp, sunny, Midwest March morning is no time for a waking nightmare. In the two-story, brick schoolhouse, teachers and children assumed it was a drill when they heard the booming gong sound three times for a fire alarm. Lake View School was well-practiced, and in each class the little boys and girls quickly lined up to go to their designated exit. Down below, the school caretaker — who had arrived that morning at 06.30 for his usual routine of cleaning and stoking up the coal furnace, and been confronted around 09.30 by a girl shouting about ‘fire in the basement’ — had seen the smoke for himself. From the gong he rushed to open the front and back doors to help everyone get clear of the building more easily.

Air rushed in and, with an explosive roar, flames erupted out of the basement and filled the hall and front stairway, meeting the converging lines of children head-on. Singed and already choking, discipline went by the board. So many children rushed the back door that they jammed each other in a panicked tangle of arms and legs. Others behind them flung themselves on top, trying to scramble to safety. Pushed back by flames and blocked by the pile of screaming bodies, those still trying to come downstairs turned back, creating a new mayhem at the windows and fire escape.

Outside, the first adults to the scene pulled outstretched limbs as they burned, but the children were locked in fatal embrace, ten deep and screaming in agony. In 20 gruesome minutes, they died while their parents tried to beat the flames with naked fists. And it was Ash Wednesday.

When was the Collinwood School Fire: March 4 1908

What was the Collinwood School Fire death toll: Of nearly 400 children, 172 died alongside two teachers and one of the rescuers; 19 could not be identified; many others were known only by some adjacent trinket, ring or watch. Nothing at all remained of the school except the blackened brick walls and a chimney stack.

You should know: The township of 20,000 was utterly devastated. Volunteers had to keep a suicide watch on parents driven mad with grief; but the town itself opted to disappear, by means of annexation to the city of Cleveland. The last act of residents was to vote for a memorial garden to cover the ground plan of the school. Among many heartbreaking mementoes was a piece of broken slate board. Written on it in chalk was the beginning of the sentence ‘I like to go to school… ‘. At least the disaster forced schools throughout America to revise safety regulations and codes of practice. 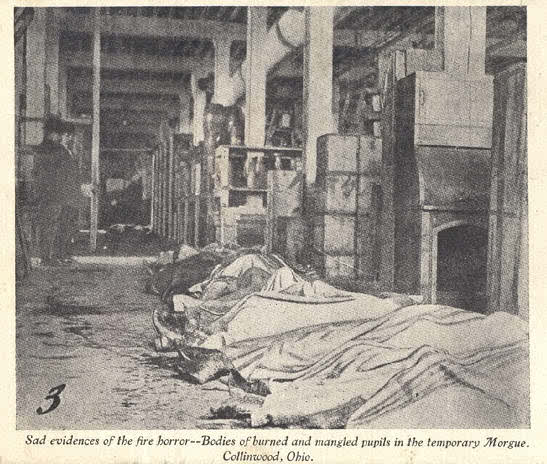 7 Most Dangerous Serial Killers of all Time

Humanity has gone a long way since the dark times, yet some chapters of our

Attention! 5 Signs a Tornado Will Hit Your State

What is a tornado? A tornado is a fast spinning cluster of air that extends

American vs Russian Military (Which One Is Stronger?)

How Does The US Military Power Compare To Other Countries? Tensions between the United States

8 Most Horrific Massacres In World History

Throughout history, many massacres have occurred that most people nowadays might consider outrageous, but sadly,

8 Most Destructive Weapons Developed By The US Military

9 Signs That A Devastating Storm Is Coming

12 Celebrity Deaths That Made 2021 Even More Devastating

10 Most Devastating Tornadoes In US History

6 US Locations With Devastatingly Beautiful Sunsets